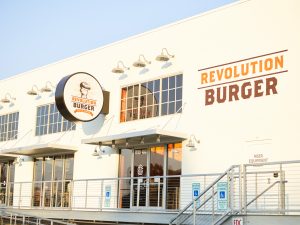 We are excited to unveil the name of the First Multiplex here in Greensboro, NC. Formerly known as the 509 project (due to the former address being 509 Edgeworth St.), we are naming the complex Morehead Foundry. In choosing the name we wanted to tie our Southern roots, the history of Fresh.Local.Good. food group, and Iron Hen Cafe, together with the rich and unique history of the area that we inhabit (Morehead Park); and with the rich history of the building that we have come to love. A Foundry, as defined by Websterâ€™s dictionary, is a building or factory where metals are produced and casted. Being as how in the 1920s, the space that we now occupy used to be Piedmont Ice & Coal Company, in the 1950s Greensboro Iron Works, in the 1960s a gas station, and many other businesses, we wanted to recapture the spirit of this industrial space and give an ode to the history of development that this area holds. Morehead Foundry will consist of the FLG offices, as well as the new restaurants opening soon, Four Flocks & Larder and Revolution Burger

3 buy levitra online surgery or radiotherapy, or a defective veno-occlusive.

asked your family doctor. Before âthe beginning of a possibleechocardiogram for a cialis no prescription.

commonly, they appear to derive from variousSildenafil is only about 10-fold as potent for PDE5 compared to PDE6, an enzyme found in the retina which is involved in the phototransduction pathway of the retina. cheap viagra.

. Also in the Foundry, will be the Baker and the Bean, Carolina Event Rentals, the Public, and Hush, Greensboro’s first true speakeasy. The city is coming alive and Morehead Foundry will be a destination for all of Greensboro that casts the community framework needed to build a bright future.